Georgia became one of the inaugural states in the Complete College America coalition in 2009, committing to a comprehensive approach to improving post-secondary certificate and degree attainment in the state.  A partnership was forged between the University System of Georgia (USG), the Technical College System of Georgia (TCSG) and the state’s independent colleges.  These groups adopted an ambitious agenda to better prepare Georgia’s workforce for the demands of a 21st Century workplace.

Improving post-secondary outcomes does not occur in a vacuum.  Achieving meaningful increases in the number of Georgians with certificates and degrees requires dedicated partnerships among K-12 education, the TCSG, the USG and the private sector.  A greater number of high school students will need to move through post-secondary education more efficiently and more adults must be encouraged and supported as they enter or return to college in order to meet Georgia’s ambitious goals.  CCG in Context

When Governor Nathan Deal launched the Complete College Georgia (CCG) initiative in August 2011, he called for specific measures at all institutions in the state’s University System and TCSG to increase access, retention and completion.  At the time, the percentage of Georgians with post-secondary credentials was 42 percent, considerably below the level of attainment that the state will require in the near future to remain competitive nationally.  This increase in degree attainment will allow more Georgians the opportunity to participate in furthering the state’s economy at an optimal level.

Governor Deal announced CCG at the depth of the Great Recession, when college enrollment nationally and in Georgia surged as displaced workers returned to school to improve their skills and expand their opportunities.  As the weight of the economic downturn has abated, post-secondary enrollment has declined as many of these students have been re-tooled and re-trained to enter Georgia’s workforce with meaningful credentials that have made them workforce ready.  This shift of students to the workforce has amplified the challenges of meeting the ambitious goals set out for the state in 2011 and made the efforts underway even more critical. 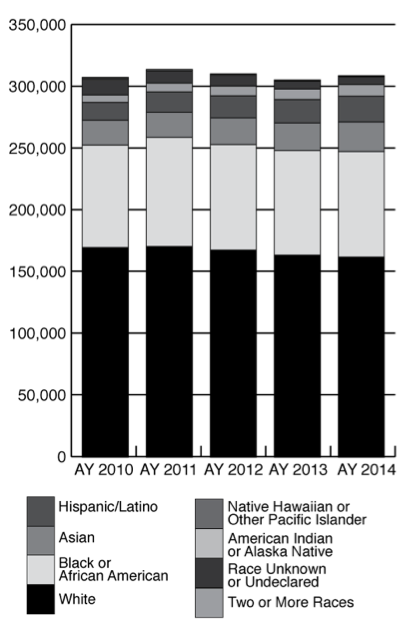 The University System of Georgia includes 31 institutions, with fall 2014 enrollment of 312,936 students.  This figure is down from the record high enrollment of 318,027 the System experienced in fall 2011, but an increase of 3,467 students from Fall 2013.  From that high point, enrollment has declined as the as the pinch of the economic downturn diminishes.  Fall 2013 enrollment fell below Fall 2010 enrollment, and by Fall 2014, enrollment had dropped down to near Fall 2009 levels.

Student preparation for college remains a significant challenge for college completion in Georgia.  While the Georgia Department of Education has been making tremendous efforts to improve the preparation of K-12 graduates, one in five students admitted to a University System institution required learning support in 2014.  While this is down considerably from 2010, when the figure was 30 percent, the number of students who enter requiring support poses significant challenges for our institutions.  The overwhelming majority of USG students enrolled in learning support—80 percent—are being served by one of the state’s 13 state colleges.  Even though the number of students has declined (in large part do to change in admissions requirements in 2012 prohibiting students with the lowest indicators of preparation from being admitted), the University System enrolled more then 10,000 freshmen in learning support in 2014.  For this reason, the emphasis on improving student outcomes in these programs, largely through changes in delivery mode, is a significant priority for the University System’s Complete College Georgia work. 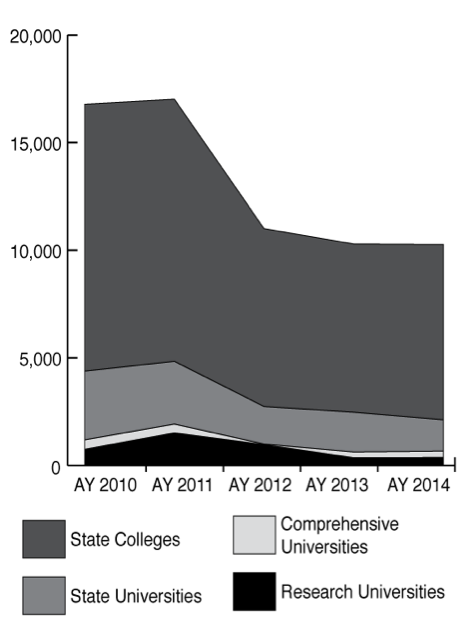 The University System’s mission is to create a more educated Georgia. Census data from 2014 indicate that 40 percent of young adults (ages 25-34) and nearly 39 percent of all working age adults (age 25-64) possess at least an associate’s degree.  Twenty-two percent of working age Georgians—well over a million—indicate that they have some college, but no degree.  Georgia’s young adult population has educational attainment levels above the national average for associate degrees and higher, but across the working age population, the situation is reversed.  See Figure 3. 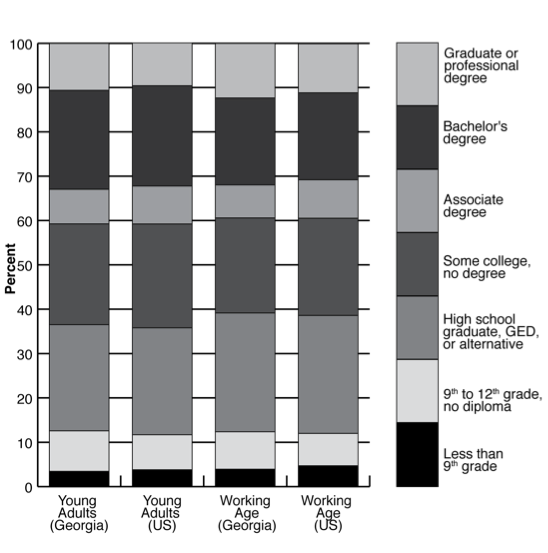 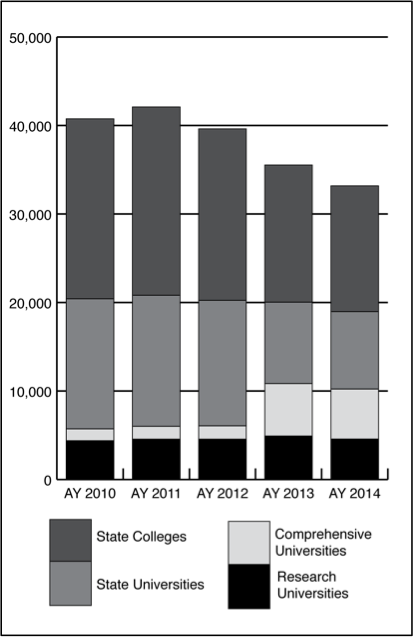 Georgia’s educational attainment rates have improved over the past five years, due in part to degree conferrals at all levels rising by 18 percent since the 2010 Academic Year.  While the state has been able to exceed its goals for degree production since the announcement of the Complete College Georgia initiative in 2011-2012, demographic and economic trends underscore the significant work still needed to maintain the state’s momentum.  Figure 5 provides a view of degree production from 2010-2014. 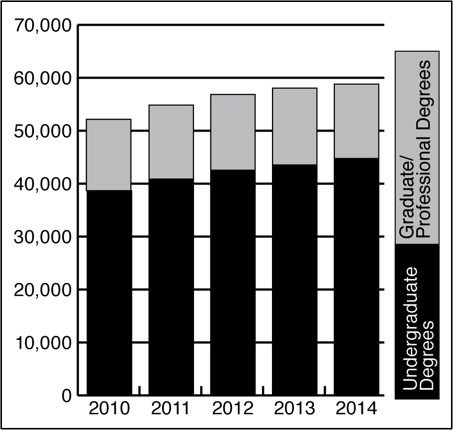 Georgia’s colleges and universities provide a wide range of programs to meet the state’s diverse needs.  The System office has continued to work with institutions to focus on research-based, high-impact strategies that have the potential to improve student outcomes.  Top-level work areas that have been the focus of the System’s Complete College Georgia activities are:

These top level strategies have in some instances been further refined to provide more flexibility to serve the range of institutions within the University System.

The overarching goal for Complete College Georgia is to increase the number of undergraduate degrees awarded by USG institutions.  In order to achieve this goal, the University System has adopted seven strategically-oriented, supporting goals:

Each goal addresses a specific challenge to completion that has been identified through research.  By approaching completion through a set of goals focused on removing specific barriers to success, the University System is advancing a strategy with sufficient flexibility to be effective at every campus in the System and adaptable enough to have impact across the institutional spectrum in Georgia. The success of this flexible approach is evident in the degree and scope of adoption of strategies across the System.  Table 1 shows the use of the seven goals listed above across 30 USG institutions.

This represents a wide range of activities across the System, and underscores a deep commitment to completion work throughout the state.  The variety of goal-oriented strategies offers institutions to focus on those activities that match their profile and institutional mission, while not expending limited resources to pursue goals that are not priorities for the institution.   Identification of and use of these common goals have helped to focus the work at the System level on high impact strategies and provided guidance on how to implement various activities at the campus level.

Much progress has been made since Georgia joined with other states in 2009 to focus on college completion.  Since that time, a recession has transformed the economy and the demands of the workplace.  In partnership with the Technical College System of Georgia, the institutions of the University System have risen to the challenge and taken major steps to help prepare Georgia with the workforce of the future.  In 2014-2015, System Office staff used several convening opportunities to assess campus progress, commitment, needs and successes.

The results of this process are encouraging.  Campuses report a shift in culture toward completion that permeates other work on campus.  The strong focus of the state to college readiness and completion is reinforced at the campus level by concrete commitments of resources and personnel to completion work.  Institutions are investigating a host of opportunities—including centralized, professional advising, new instructional methods, and the enhanced use of data—to support and advance their students.

Complete College Georgia remains a work in progress, investigating and adapting promising, research-based innovations from across the country to support Georgia students.  The success Georgia has experienced in the initial, limited phase of implementation of corequisite remediation suggests a significant expansion of opportunity for a group of students who faced overwhelming challenges gaining traction for their post-secondary aspirations.  As the program moves to scale, the opportunity for the community of practitioners to support and enhance work across the System demonstrates the power of a System approach to shared challenges.

This may also prove true with the application of data and predictive analytics across the System.  While using data to reach out to students at key momentum points to improve their outcomes has been proven as a model for success, there remain resource and capacity challenges to its adoption at a number of institutions.  Finding the opportunities to leverage the tremendous capacity resident in our institutions remains the greatest strength for the University System.

Finally, while much progress has been made, much remains to be done.  The state’s ambitious goal for post-secondary degrees and credentials will require not just more success with the students who are already enrolling, but efforts to encourage those who may have some college experience to return and complete their degrees. Facilitating success for this community will require new approaches, new thinking, and new systems to ensure that they are able to thrive in higher education.  As Complete College Georgia moves into its fifth year, the focus will be on extending the momentum beyond the core areas of success and reaching into new arenas.